In the early 1970’s, Corvallis did not have any festivals. The only special event each year in the community was the Benton County Fair. Rose Ostby, a local business woman, got tired of hearing residence ask why Corvallis does not have any festivals and had an idea to start an International Festival celebrating cultures from around the world. Rose approached then Corvallis Chamber of Commerce Executive Director, Karl Cayford, with her idea. Cayford was skeptical of the idea. His idea was to stage a small arts festival as the need for a community based arts festival was evident. Rose agreed and accepted the challenge to organize an arts festival with the understanding that none of the artisans could bring commercially made items. All items had to be crafted by the artisans, a policy that still remains in effect today.

An organizing committee was formed from the membership of the Corvallis Chamber of Commerce and Corvallis Jaycees. The initial task of the committee was to name the event, determine the dates and find a location. After much deliberation, the committee members decided to name this arts festival the Corvallis Fall Festival. The dates for the inaugural festival were September 22 and 23, 1973. These dates were chosen as to coincide with the start of fall term at Oregon State University as a welcome back to the students and faculty. Central Park was chosen as the site due to its close proximity to the OSU campus and Downtown Corvallis.

The inaugural festival would feature 73 artisans from throughout the State of Oregon. Entertainment would be presented by the NW Banjo Band, Corvallis Senior Citizens Recycling Band, the Ataraxis jazz group, Lebanon Strawberry Chorus and ragtime music by Gladys Chambers of Philomath. Several food booths participated with the main one serving buffalo burgers. This first festival had children’s activities. A special puppet show, “The Mystery of the Moon Coonies”, was presented. The festival was scheduled to have had a parade and a Saturday night street dance in front of City Hall. Unfortunately, due to inclement weather, the parade and dance was cancelled. The festival, despite the weather, was deemed a success.

In 1981, over two inches of rain fell during the festival.

In 1992, to celebrate the Festival’s 20th anniversary, the organizing committee decided to expand the festival for that one year to three days. In addition, the committee relocated the foods booths and entertainment stage from the Corvallis Arts Center’s parking lot to Monroe Avenue. The Saturday night street dance, that had been discontinued several years prior, was restarted.

The festival remained under the auspices of the Corvallis Area Chamber of Commerce until February 1994. A change of leadership and philosophy at the Chamber prompted the Board of Directors to spin off the festival to become an independent entity with its own Board of Directors and Organizing Committee.

The 2003 festival was the warmest as temperatures reached almost 100 degrees.

In 2013, the festival was shortened when a former typhoon came ashore with heavy rains and winds that ended the festival late Saturday afternoon. 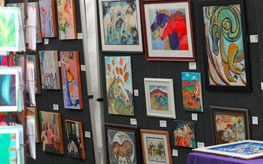